Scholia (singular scholium or scholion, from Ancient Greek: σχόλιον, “comment, interpretation”) are grammatical, critical, or explanatory comments — original or copied from prior commentaries — which are inserted in the margin of the manuscript of ancient authors, as glosses. One who writes scholia is a scholiast. The earliest attested use of the word dates to the 1st century BC.

Scholium, Scholia: interpretive or explanatory notes added (normally in the margin) to a Greek manuscript by a teacher or scribe.

Bruce Metzger: Scholia are interpretive remarks of a teacher placed beside the text in order to instruct the reader. When scholia are systematically developed to elucidate continuously the entire text, rather than being merely random notes on certain passages, the work is called a commentary. Scholia and commentaries are sometimes placed in the margins around the Scripture text and sometimes interspersed 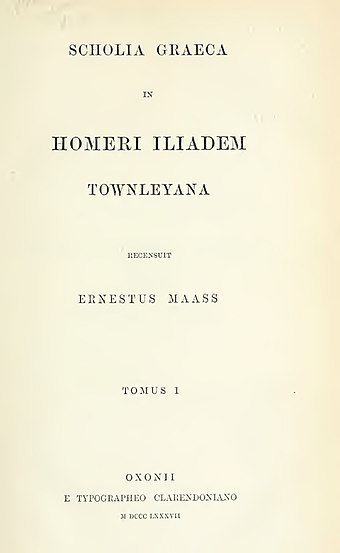 Ancient scholia are important sources of information about many aspects of the ancient world, especially ancient literary history. The earliest scholia, usually anonymous, date to the 5th or 4th century BC (such as the “a” scholia on the Iliad). The practice of compiling scholia continued to late Byzantine times, outstanding examples being Archbishop Eustathius’ massive commentaries to Homer in the 12th century and the scholia recentiora of Thomas Magister, Demetrius Triclinius, and Manuel Moschopoulos in the 14th.

Scholia were altered by successive copyists and owners of the manuscript, and in some cases, increased to such an extent that there was no longer room for them in the margin, and it became necessary to make them into a separate work. At first, they were taken from one commentary only, subsequently from several. This is indicated by the repetition of the lemma (“headword”), or by the use of such phrases as “or thus”, “alternatively”, “according to some”, to introduce different explanations, or by the explicit quotation of different sources.

The most important are those on the Homeric Iliad, especially those found in the 10th-century manuscripts discovered by Villoison in 1781 in the Biblioteca Marciana in Venice (see further Venetus A, Homeric scholarship), which are based on Aristarchus and his school. The scholia on Hesiod, Pindar, Sophocles, Aristophanes, and Apollonius Rhodius are also extremely important.

In Latin, the most important are those of Servius on Virgil; of Acro and Porphyrio on Horace; and of Donatus on Terence. Also of interest are the scholia on Juvenal attached to the good manuscript P; while there are also scholia on Statius, especially associated with the name Lactantius Placidus.

From Wikipedia, the free encyclopedia, and edward D. Andrews

One thought on “SCHOLIA: Grammatical, Critical, or Explanatory Comments In the Margins of Manuscripts”