The Oxyrhynchus Papyri are a group of manuscripts discovered during the late nineteenth and early twentieth centuries by papyrologists Bernard Pyne Grenfell and Arthur Surridge Hunt at an ancient rubbish dump near Oxyrhynchus in Egypt (28°32′N 30°40′E, modern el-Bahnasa).

The manuscripts date from the time of the Ptolemaic (3rd century BC) and Roman periods of Egyptian history (from 32 BC to the Muslim conquest of Egypt in 640 AD).

Although most of the papyri were written in Greek, some texts written in Egyptian (Egyptian hieroglyphics, Hieratic, Demotic, mostly Coptic), Latin and Arabic were also found. Texts in Hebrew, Aramaic, Syriac and Pahlavi have so far represented only a small percentage of the total.

Since 1898, academics have collated and transcribed over 5,000 documents from what were originally hundreds of boxes of papyrus fragments the size of large cornflakes. This is thought to represent only 1 to 2% of what is estimated to be at least half a million papyri still remaining to be conserved, transcribed, deciphered and cataloged. At the time of writing, the last published volume was Vol. LXXXVI, released on 30 November 2021.

Oxyrhynchus Papyri are currently housed in institutions all over the world. A substantial number are housed in the Sackler Library at Oxford University. There is an online table of contents briefly listing the type of contents of each papyrus or fragment.

Administrative documents assembled and transcribed from the Oxyrhynchus excavation so far include:

Although most of the texts uncovered at Oxyrhynchus were non-literary in nature, the archaeologists succeeded in recovering a large corpus of literary works that had previously been thought to have been lost. Many of these texts had previously been unknown to modern scholars.

Several fragments can be traced to the work of Plato, for instance the Republic, Phaedo, or the dialogue Gorgias, dated around 200-300 CE.

Another important discovery was a papyrus codex containing a significant portion of the treatise The Constitution of the Athenians, which was attributed to Aristotle and had previously been thought to have been lost forever. A second, more extensive papyrus text was purchased in Egypt by an American missionary in 1890. E. A. Wallis Budge of the British Museum acquired it later that year, and the first edition of it by British paleographer Frederic G. Kenyon was published in January 1891. The treatise revealed a massive quantity of reliable information about historical periods that classicists previously had very little knowledge of. Two modern historians even went so far as to state that “the discovery of this treatise constitutes almost a new epoch in Greek historical study.” In particular, 21–22, 26.2–4, and 39–40 of the work contain factual information not found in any other extant ancient text.

The discovery of a historical work known as the Hellenica Oxyrhynchia also revealed new information about classical antiquity. The identity of the author of the work is unknown; many early scholars proposed that it may have been written by Ephorus or Theopompus, but many modern scholars are now convinced that it was written by Cratippus. The work has won praise for its style and accuracy and has even been compared favorably with the works of Thucydides. 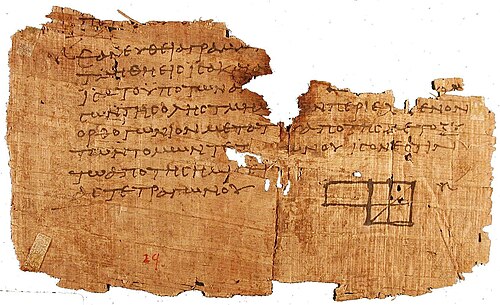 One of the oldest surviving fragments of Euclid’s Elements, found at Oxyrhynchus and dated to circa AD 100 (P. Oxy. 29). The diagram accompanies Book II, Proposition 5.

The findings at Oxyrhynchus also turned up the oldest and most complete diagrams from Euclid’s Elements. Fragments of Euclid discovered led to a re-evaluation of the accuracy of ancient sources for The Elements, revealing that the version of Theon of Alexandria has more authority than previously believed, according to Thomas Little Heath.

Lines 96–138 of the Ichneutae on a fragment of Papyrus Oxyrhynchus IX 1174 col. iv–v, which provides the majority of the surviving portion of the play

The classical author who has most benefited from the finds at Oxyrhynchus is the Athenian playwright Menander (342–291 BC), whose comedies were very popular in Hellenistic times and whose works are frequently found in papyrus fragments. Menander’s plays found in fragments at Oxyrhynchus include Misoumenos, Dis Exapaton, Epitrepontes, Karchedonios, Dyskolos and Kolax. The works found at Oxyrhynchus have greatly raised Menander’s status among classicists and scholars of Greek theater.

Another notable text uncovered at Oxyrhynchus was Ichneutae, a previously unknown play written by Sophocles. The discovery of Ichneutae was especially significant since Ichneutae is a satyr play, making it only one of two extant satyr plays, with the other one being Euripides’s Cyclops.

Extensive remains of the Hypsipyle of Euripides and a life of Euripides by Satyrus the Peripatetic were also found at Oxyrhynchus.

An epitome of seven of the 107 lost books of Livy was the most important literary find in Latin. 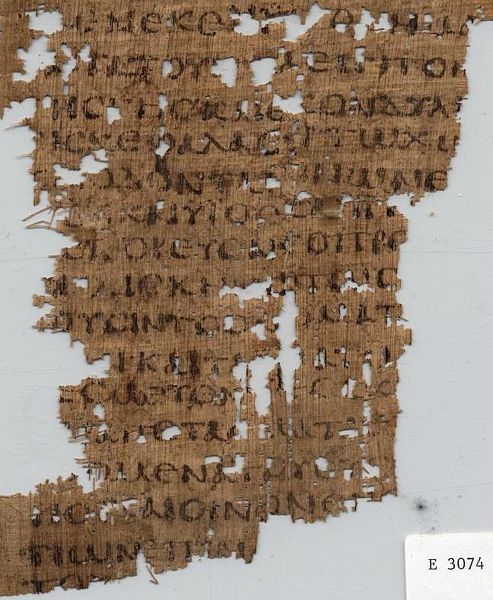 The original Hebrew Bible (Tanakh) was translated into Greek between the 3rd and 1st centuries BC. This translation is called the Septuagint (or LXX, both 70 in Latin), because there is a tradition that seventy Jewish scribes compiled it in Alexandria. It was quoted in the New Testament and is found bound together with the New Testament in the 4th and 5th century Greek uncial codices Sinaiticus, Alexandrinus and Vaticanus. The Septuagint included books, called the Apocrypha or Deuterocanonical by Christians, which were later not accepted into the Jewish canon of sacred writings (see next section). Portions of Old Testament books of undisputed authority found among the Oxyrhynchus Papyri are listed in this section.

This name designates several, unique writings (e.g., the Book of Tobit) or different versions of pre-existing writings (e.g., the Book of Daniel) found in the canon of the Jewish scriptures (most notably, in the Septuagint translation of the Hebrew Tanakh). Although those writings were no longer viewed as having a canonical status amongst Jews by the beginning of the second century A.D., they retained that status for much of the Christian Church. They were and are accepted as part of the Old Testament canon by the Catholic Church and Eastern Orthodox churches. Protestant Christians, however, follow the example of the Jews and do not accept these writings as part of the Old Testament canon.

The Oxyrhynchus Papyri have provided the most numerous sub-group of the earliest copies of the New Testament. These are surviving portions of codices (books) written in Greek uncial (capital) letters on papyrus. The first of these were excavated by Bernard Pyne Grenfell and Arthur Surridge Hunt in Oxyrhynchus, at the turn of the 20th century. Of the 127 registered New Testament papyri, 52 (41%) are from Oxyrhynchus. The earliest of the papyri are dated to the middle of the 2nd century, so were copied within about a century of the writing of the original New Testament documents.

Grenfell and Hunt discovered the first New Testament papyrus (𝔓1), on only the second day of excavation, in the winter of 1896–7. This, together with the other early discoveries, was published in 1898, in the first volume of the now 70-volume work, The Oxyrhynchus Papyri.

The Oxyrhynchus Papyri collection contains around twenty manuscripts of New Testament apocrypha, works from the early Christian period that presented themselves as biblical books, but were not eventually received as such by the orthodoxy. These works found at Oxyrhynchus include the gospels of Thomas, Mary, Peter, James, The Shepherd of Hermas, and the Didache. (All of these are known from other sources as well.) Among this collection are also a few manuscripts of unknown gospels. The three manuscripts of Thomas represent the only known Greek manuscripts of this work; the only other surviving manuscript of Thomas is a nearly complete Coptic manuscript from the Nag Hammadi find. P. Oxy. 4706, a manuscript of The Shepherd of Hermas, is notable because two sections believed by scholarsto have been often circulated independently, Visions and Commandments, were found on the same roll.

three libelli are dated: all to the year 250, two to the month, and one to the day;
a warrant to arrest a Christian is dated to 28 February 256.

7 thoughts on “OXYRHYNCHUS PAPYRI: The Most Numerous Subgroup of the Earliest Copies of the New Testament”